Notting Hill Carnival is the largest street theatre of its kind in Europe having been developed since the late 1950s in London. It is a great participation celebration for Caribbean heritage, culture and identity that has gradually been adopted and inclusive of other similar cultures in the city. I have blogged about Trinidad Carnival here, and the two carnivals are similar but have their own idiosyncrasies and dynamics. The background and roots of this Carnival is European. Europeans celebrated Carnival before lent for Mardi Gras in the Caribbean colonies, this was eventually practised by the African slaves who brought their own rich African traditions, dance, music and song to the party.  Trinidad carnival is the inspiration for the Notting Hill Carnival but it certainly is a different story.

Calypso and Caribbean culture came with immigrants in the Windrush years from the Caribbean, and it is even noted that Lord Kitchener wrote the words to ‘London is the place for me’ whilst on his journey on a ship across the Atlantic Ocean. There was a high number of Trinidadian immigrants who settled in Notting Hill in the 1950s, which was a relatively run down and cheap area to live at the time. These black communities were intimidated by white youths from ‘Teddy Boy’ gangs in 1958, which caused the Race Riots of 1958. The first ‘Caribbean Carnival’ was organised in 1959 for the black community to help with the legal costs of the arrests made that year. The ‘Caribbean Carnival’ was the brainchild of Claudia Jones, a social activist and writer, who arranged the first carnival indoors in cold January 1959 at the St Pancras Hall in King’s Cross, London. I saw notes that it was in a cabaret style, with a Carnival beauty queen competition, steel pans and a dance hall as the grand finale. This carried on for a few years but did not last as Claudia Jones passed away suddenly and unexpectedly in 1964. Eventually the Carnival moved to Notting Hill where most of the Trinidadians immigrants lived, and then was held in the summer. Fifty years on – it has become a part of the social and cultural calendar for Caribbean, Latin American and African descendants and communities. It has also been laced with race and police tensions throughout this time, which I will mention later. 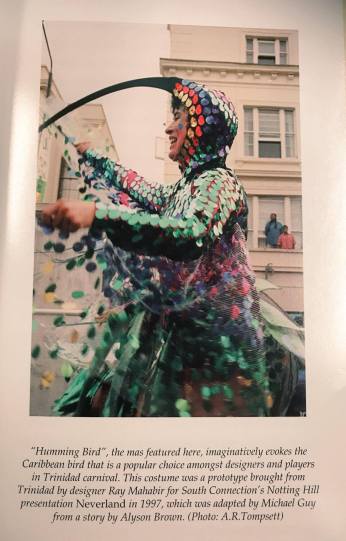 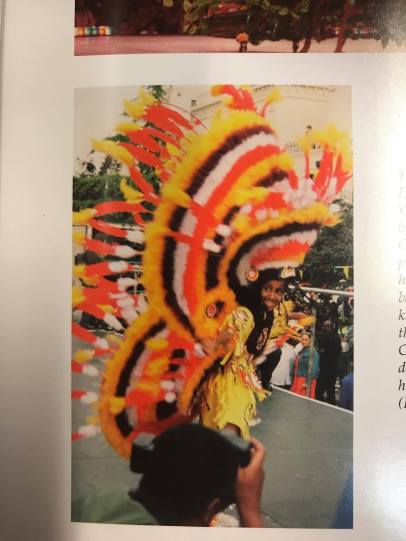 This year is the 51st year of the carnival, and I will be celebrating it in Notting Hill with family and friends. It is a time of year when you will get messages asking if you are taking part in ‘Mas’ as we fondly call it. Our key community leaders chose a band theme when costumes are prepared, materials sourced, created, and then put it all together in the three months leading up to the bank holiday weekend for Notting Hill carnival. There is a lot more that goes on behind the scene, such as the registering of the band with the London Notting Hill Carnival Enterprises, security passes, vehicle hire, food, drinks, DJs, sound systems, etc. We have intentionally kept our band low-key, affordable and non-commercial with a more close-knit group of volunteers and Mas players. This year we are calling our band theme ‘Mas liberation’, with our costumes designs based on Native American Indians attire. I love digging deeper – I will therefore be channelling my inner Pocahontas as we celebrate the 400th death anniversary in the United Kingdom. We have been dressed as  Cleopatras, Sun Goddesses, Sailors, Queen of Hearts, Aliens, for example in past Carnivals. There certainly is community spirit as you volunteer to help in the creation of the costumes in a team effort, and we tend to meet regularly before and during Carnival.   Generally it is good, happy fun in surprisingly…a Carnival atmosphere.

I have honestly witnessed both the good and bad side of Carnival. It has always been a ‘resistance festival and art form’. There are times when you see scenes, and can be in a scary situation, usually later in the evening when the tension and pressure builds with youths and the police. There are some carnivals when the tension is more apparent than others – I distinctly remember the 2011 Carnival being a bit tenser as it was just after the London Riots. Our sound system truck was directed to an alternative route and it took a long time getting home with several helicopters circulating overhead – it felt like a war zone, but I was there with people who were close to me so I kept safe. With a large crowd of one million plus people, there are sometimes scuffles by youths, firm control by the police, body searches, and therefore you really should go with friends to enjoy it and to be safe. It is not all cautionary, we do dance and be merry with spectators…and the police too.

Notting Hill is great for signifying creativity, social cohesion, cultural identity and race relations in the capital. It was reported by the LDA that it brings in approximately £93Million to the UK economy. In ‘The Midnight Robber – the artist of Notting Hill’ published in 2007 for City Hall by Lesley Ferris and Adela Ruth Tompsett, the ex-mayor of London Ken Livingstone states that “London is the home to some of the world’s finest Carnival artists who are now in demand across the world serving as cultural ambassadors for London, the UK and the African diaspora”. 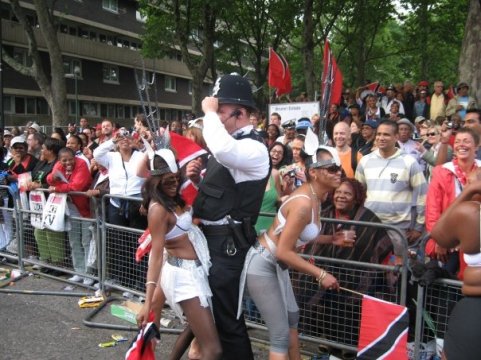 This is how it is too. Here at Trini-Corner.

This Carnival has grown organically into a successful and important celebration of the UK’s history with its former colonies, and these new London communities. It should be supported, celebrated and evolve into something that has a lasting legacy rather than just the negative rhetoric that is perpetuated by an ignorant media and some politicians. The Carnival doesn’t look like it will stop in the near future, and frankly…it shouldn’t for the thousands of people who go to this part of London to enjoy it. As quoted on the Black Cultural Archives – “Carnival is now part of our English heritage, it is about freedom of expression on the streets. Britain would be a very gloomy place without it.” Winston Findlay, Source: Carnival: a photographic and testimonial history of the Notting Hill Carnival by Ismail Blagrove Jr.

Calypso, soca, reggae, steel pan, dance and now samba too are some of the other art forms that I look forward to at Notting Hill Carnival, and you get to see and be part of the crowd engagement on this grand scale. As my research reveals, Trinidadians started the Notting Hill Carnival but other West Indian countries joined in the celebrations, such as the Jamaicans with their sound systems in 1975. The Brazilians, Africans and other communities also add some spices over the years. I remember observing this difference in my first carnival here in 1990. As we know now, Carnival is celebrated all across the world such as in Canada for Caribana, Labor Day in New York, Miami, Japan and my British-Trinidadian friends have been on cultural exchange trips to China too. Rihanna has in recent years been ‘breaking the internet’ (like Kim Kardashian) with her Carnival costumes at Barbados’s Crop Over festival. Have a look at the Carnevale Network social media site too, as they are great for sharing news and longer pieces on the global Carnival scene.

It is also a time for Caribbean artists to collaborate with their UK counterparts. I just came back from a soca music gig in London and it certainly put us in the mood for Carnival. It is amazing to see so many people dancing to soca and some dancehall, the crowd may be young British…but they knew all the words and moves to the dance tunes. This is scaled up a thousand times for the masqueraders on the road in Notting Hill.

“Carnival is always telling you something. It is a language, if you can understand the language then you can read Carnival” – Clary Salandy, Artist and Theatre Designer.

Carnival also means art, creativity and business. Trinidadian-born Clary Salandy is one of many artists and theatre designers who has worked and showcased her costumes in the UK and internationally for various Carnivals, parades, festivals and community art projects. She engages with the local community to pass on her craft but also believes in this as an art form that includes the community as mention in ‘Incremental Art: Negotiating the route to London’s Notting Hill Carnival’ by Lesley Ferris. I only just discovered her too when I saw her featured in the British Airways in-flight magazine this summer. Clary Salandy has a great way to describe her costumes – “A costume is like a visual poem, whether you are 2 or 88”.

The current political mood and devastating situation with the fire at Grenfell in close proximity has highlighted the Notting Hill Carnival this year, and some parts of the population want the carnival to fail. However, Carnival is a symbol and beacon of hope, unity, brotherhood and Britain at its’ multicultural best. All the critics should remember that, and hope it heals rather than it hurts.

“Notting Hill as a Place held a special symbolic significance for the West Indians who regarded it as, in the words of one leader, the nearest thing they had to a liberated territory – implicit references to battles they had fought there against white racists in 1958, and against the police in 1970 and 1976. The carnival continued to exist, its greatest political achievement being that it survived at all, in the face of formidable opposition and pressures operating to subvert it all the time.” Abner Cohen

Regardless of the negative media coverage – Carnival is in healthy hands with young designers and masquerade bands. The Internet and social media have also given traction to the positive benefits for Carnival as an art form, empowerment, freedom and cultural identity. The most difficult part is the obvious media bias, misinformation and tension created by the police and delinquents. Sadly, we know that there is some crime and anti-social behaviour – it has always been a tradition of resistance. However, I have been going to the Notting Hill Carnival and would like to advocate that it is mainly a great, peaceful and happy experience where you can feel connected to that rich heritage, and forget the past troubles. There is no better way to share the Carnival’s brilliance but in a cosmopolitan and tolerant city.

I clearly recall that Carnival was used as a positive showcase of multicultural and tolerant Britain in the run up to London 2012. It seems to have changed since then. Ferris states, “Many felt that London’s successful bid for the London 2012 Olympics was enhanced by the Carnival art, which demonstrated a vibrant artistic diversity in the nation’s capital. But there is still a long way to go.”

Understanding, acceptance versus bias and other cultural differences means that it will continue to be controversial in this country (have a look at the news and hashtag #NottingHill on Twitter!). Carnival is not mainstream in this country (as it comes out of European Roman Catholic traditions), but Carnival is still celebrated by various communities across the UK, such as in Leeds, Birmingham and other cities holding annual Caribbean Carnivals. We know that we lack funding and support, but for those who understand and want to be part of this special festival and celebration – we ask that you join us in making a new happier and diverse history for generations to come. It is our time to be free and identify with what is ours too. What better way than with everybody dancing on the street!