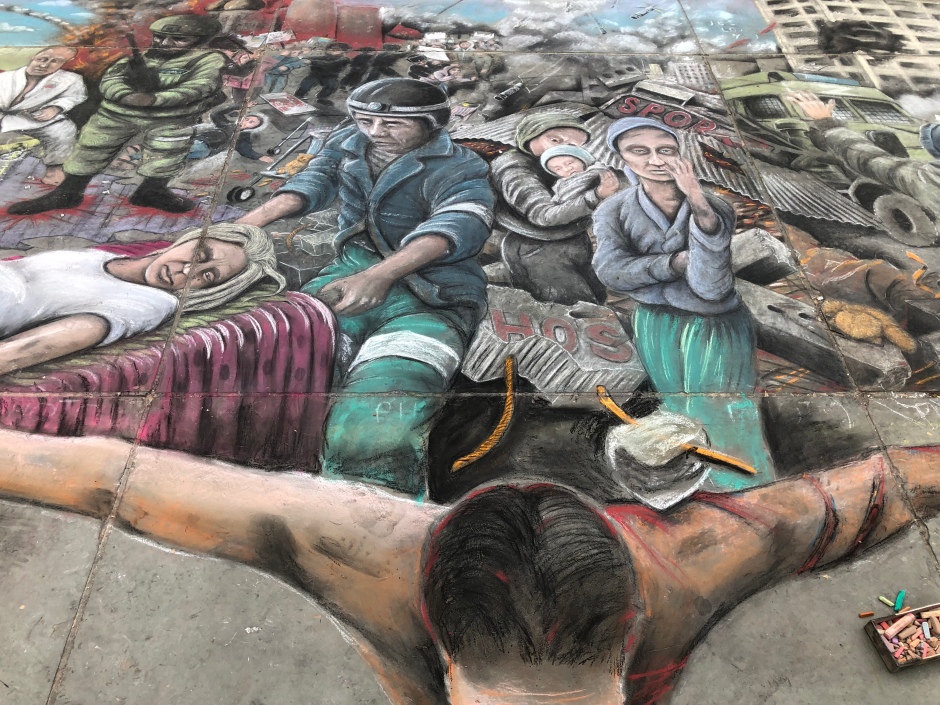 It seems like the last decade there has been crisis after crisis – recession, terrorist attacks, extreme weather, Brexit, pandemic, conflicts such as in Syria and Afghanistan, and now the Russian invasion of Ukraine.  These are in our recent memory and it really which is having an impact on our aspects of everyday life such as standards of living, rising costs, well-being and freedom. Some might argue that everything is fine and there is no crisis but only just a lot of media hype.  I beg to disagree. There is a real human instinct to have a bit of peace and calm, and I don’t seem to have that at present personally.  However, in a personal and professional capacity – we can use these experiences to prepare us for any future crisis or issues that may arise in the future.  There is a solid belief that we can prepare, plan and implement our actions plans, responses and be crisis and disaster prepared. However we should be ready to be able to continue with our lives and work after these crisis…as we have been doing most of the time.  It is imperative that we have carried out exercises that reflect this and that we have pragmatic solutions to help us in such situations.

For just over a year, I have been involved in the crisis preparedness council for SLA called the Workplace Preparedness and Response Council (PREP) Council.  This has helped me to focus and understand the topic a lot more as well as find out the various methodologies and best practice that is available for us to adapt and adopt for our organisations.  I also looked at this generally from a type of business but also from the library perspective there are specialist areas we also have to away of in terms of physical and virtual spaces as well as our staff and our patron or customers.  I will now broadly talk about some of the insights I have learnt in the last few years.

The first major professional crisis I had in my working life was the Millennium Bug – when we were getting closer to the year 2000 when our DOS based library management system would not renew for our journal subscriptions from around 1997 as the following two year’s subscription could not cope with digits 00! There was a lot of planning and talk about how the millennium was going to affect us and most people believe there were going to be major disasters.  However, we were able to procure and implement a new Windows library management system for a few years and therefore we got over the hurdle.  We all seem to use the year format 2000 from here on with the lesson from the past that the 00 maybe be an issue again in 75+ years. I most likely will have to leave that for future generations to worry about. However, we now do have the threat of cyber-attacks, and information security for data breaches, privacy and other risks are some of the standard ways we have to think of our data and information management for the technologies and systems we use or have in our infrastructures.

There are many crises that has directly impacted on us.  As the 1990s was busy with IRA threats, the 2000s and 2010s had regular terrorist attacks on a major global scale.  Theo obviously had repercussions on our ability to move around freely and safely.  Climate change has also seen us experience severe weather and as the evidence implicates – we are still likely to experience floods, fires, snow blizzards or droughts.  I remember when we had a snow storm in 2009 – London came to a standstill due to the trains and buses unable to work and run efficiently at this time, therefore most companies asked people to work from home.  Only a few weeks ago we also had the Storm Eunice also created a lot of havoc and damage.  I also know that there are raging fires in California when I spoke to my US counterparts as well as flooding in parts of the Caribbean where I am from.   Climate change and the risks related to it are talked about a lot more and it is great that there have been some actionable ways that we can get to net Zero.

In this present time, there are two other apparent crisis that we have to live and get through together – the pandemic and conflict in Europe.  We have now had our second anniversary in the pandemic and it is likely the conflict will also be in our forethoughts for the shock of seeing war in this scale in the 21st century.  We haven’t been immune to the troubles in other regions – the current one is closer, and access to the visual destruction as well as the humanitarian cost in the sheer number of refugees that is really devastating. The impact on normal and basic human need, as well as death in these conflicts puts everything we treasure in perspective.  The response of the international libraries, archives, museums and heritage organisations and organisations has been great in solidarity with these devastations.  Misinformation and censorship have been some of the main disasters of this conflict too – one another war front there has been an information war to gain ground and points in the fight.

There are many other human and natural disasters that will continue to have a direct impact on people, home, nature, regions and ultimately us and businesses.  The best we can do is be prepared to practice, prepare and plan.

At this stage in the pandemic, we should know some of the corporate risks we are likely to encounter and we should really use this period over the last two year as a learning point to help us continually think of how we can continue to do business.

As part of SLA’s PREP Council, we held a great event last year with the expert author Guy Robertson on disaster planning, with his latest book entitled ‘Disaster Planning for Special Libraries’.  Guy really understands the library and information industry, and I particularly like his real examples for professionals to also practice their plans but also to stand around in a circle without the paperwork and talk to each other memorised details from ‘the head’ about the issues they would have to do make sure that the business is up and running again, smoothly and safely.  Guy also mentioned that most businesses and situation is unique so very often there is no one size fits all for disaster and business continuity plans.

“Crises and deadlocks when they occur have at least this advantage, that they force us to think.” – Jawaharlal Nehru

We’ve all been through fire drills.  Let’s be realistic – it is good to plan and prepare so we know the drill but sometimes emergencies don’t give us time to access or follow the best laid plans! I do like how Guy also mentioned the whole close community for planning and responses to disasters and emergencies – even to remind us about the safety of pets. However, as mentioned in this great resource for business continuity plans templates – it states that “without a business continuity plan…you are opening up yourself to unnecessary risks”.

I looked at several business continuities plans which generally had the action planning in general themes from the purpose of the plan to reviewing intermittently (if you would like a copy of our suggested actions – do let me know). Our top topics we suggest you plan and practice for a Business Continuity Plan are listed here:

“Don’t wait until you’re in a crisis to come up with a crisis plan.” – Phil McGraw

As uncertainty and threats are still likely to affect us now as well in the future, I hope I have piqued your interest in this area and you are confident that you have covered the risks that are likely to prepare for a crisis, disaster or problem.  With all that we have faced in recent years, we have also learnt a lot about ourselves and crises.

As I end, I wanted to share my appreciation for all the humanitarian aid, fundraising and support I have seen in recent years and months from the pandemic to the recent crisis. You may have heard that we are facing some of the worst international humanitarian crisis for about two decades – hopefully we can use this knowledge to help us to act.

“Since the world has existed, there has been injustice. But it is one world, the more so as it becomes smaller, more accessible. There is just no question that there is more obligation that those who have should give to those who have nothing.”